The Village of Sais is a small farmer village in Egypt (Act II). It is located in the Lower Nile region between the cities of Rhakotis and Memphis.

You'll enter the village from the south-east, from the Nile Floodplain. Talk to Anpu near the entrance to start the side quest Plight of the Nile Farmers. The Reptilians you need to kill for this quest are located near the water to the south-west.

Through the northern exit you'll find a trader and the Lower Nile Portal, the second portal in Egypt. There is also a Rebirth Fountain near the northern entrance. The Temple of Ptah, where Imhotep had planned to meet you after the recovery of the Scroll of Invocation, lies a short way north from there... in ruins. Thuti, a former temple's guard, will explain to you what happened (see below).

After you're done here, proceed to the next region, the Lower Nile. 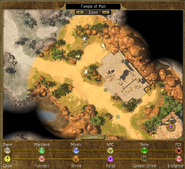