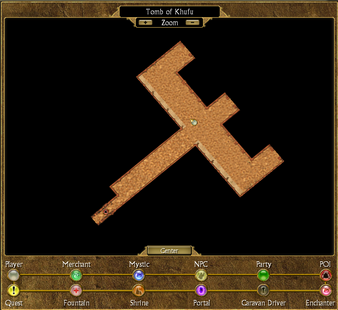 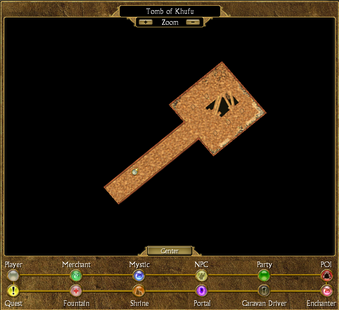 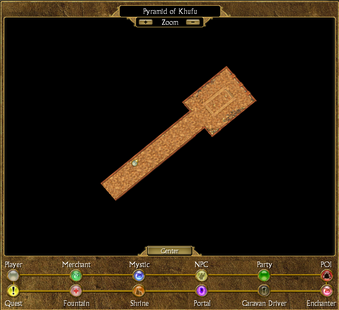 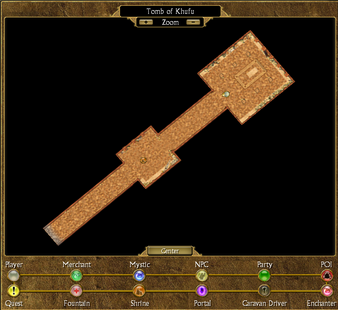 The Tomb of Khufu is a tomb in Egypt (Act II), found within the deserts of the Giza Plateau. Two side quests are associated with this tomb.

After following the large ramp up you will find three Ornamented Stone Doors. The northern stone door leads to a chamber with a few treasures.

The central door leads to a chamber where you have to fight the Jackalman hero Sadiki, Champion of Anubis, guarded by several Jackalman Beserkers. Defeating him completes the side quest Khufu's Curse. The Pharaonic Sarcophagus in this chamber is the one reference by the nomad, supposed to spread a deadly plague across this land. However, opening it will just set off a lasting poison trap.

The southern door leads to another burial chamber where Khufu's Sarcophagus is located. Kill all other monsters in the room before opening the Sarcophagus, as this will summon up four oversized skeletons. Three of them are Desecrated Dead - Flame Liches and slightly stronger versions of the regular ones. The fourth one is a Gilded Dead - Spirit Liche with an active Deathchill Aura (Spirit Mastery), which slows you down and diminishes your health. The Sarcophagus itself will drop the Staff of Khufu, which you need to return to Zazamankh in Memphis to complete the The High Priest's Request side quest.