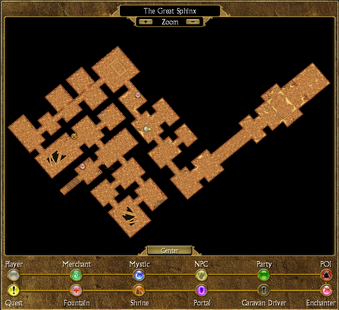 The Great Sphinx is a tomb in Egypt (Act II), accessed from the Giza Plateau. You will find the Hand of Balance here, one of the two quest items requested by Imhotep back in Memphis. Throughout the tomb you will also find more or less valuable treasure containers plus a Majestic Chest in the final chamber.

At the entrance there is a Rebirth Fountain. Progress clockwise through the rooms to find another Rebirth Fountain and a ramp leading further down to a large door, where some sort of boss-battle awaits you. The door closes when you enter the room and opens again when the battle is over.

There are four Canopic Shrines devices in this room, which look like Dark Obelisks and also have a similar function: Each shrine controls two Embalmed Dead - Adepts (undead magicians) and the two central shrines also control a Desecrated Dead - Tainted Revenant (poison-enchanted melee fighter). Killing such an undead minion immediately causes it to respawn, as long as the associated shrine exists.

So you primarily want to focus on the shrines. However, destroying a Canopic Shrine will cause a spirit emerging from it and taking control of one of the large statues sitting by the wall. These statues, called the Pharaoh's Honor Guard, are constructs with a lot of health each, but they are slow and their melee attacks do only moderate damage. Still you don't want to fight them all at once.

Usually it's the best strategy to destroy the shrines one after another, each time fighting the statue it revives, before proceeding to the next shrine. You can also lure the statues to the entrance door, as this results in some of the undead minions returning to their shrines (so you won't take the extra damage from them when fighting the statue).

Repeat this until all statues are destroyed. The doors will open again, giving you access to the Hand of Balance (on the small Sphinx statue), a quest item for the main quest The Invocation, as well as to some major treasures, including a Majestic Chest.