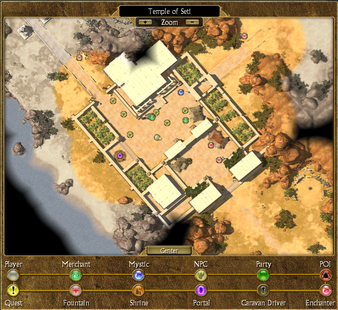 The Temple of Seti is the last 'town' in Egypt (Act II). Belonging to the city of Thebes, it is sometimes referred to as 'Thebes' in dialogues. You will enter the Temple of Seti from the south west, from the Thebes Outskirts.

Within the city, you'll find the 6th Portal, a Rebirth Fountain, merchants and a young priest named Amen-nahte, who will give you the side quest The Corrupted Priest.

To the north lies the exit to the Highland Pass, leading to the Valley of the Kings, where Imhotep sent you. To the west you'll find the Gate of Hatshepsut, which is 'locked by quest' and won't open, until you have progressed with the main quest, A Telkine in Egypt. Once you have defeated Aktaios, you'll find Imhotep standing next to the gate. Hand him the Cuneiform Tablet you obtained in the Tomb of Ramses to complete the current chapter of the main quest and to open the gate, leading to the Hatshepsut Path.

People in the Temple of Seti