Village of Tegea, to the East

Lovely forest, that lies near river to the west of Village of Tegea and inhabited by Spiders, Arachnoses and one friendly nymph. 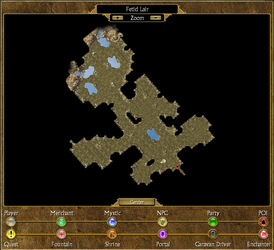 Small sublocation and part of the Tegea Forest, located in a southern corner of the region.

Another sublocation of the Tegea Forest. This is natural cave, located in north-western corner of the region and crawl with Spiders and Arachnoses.