The first time you enter the Rhakotis Slums, you see two villagers fleeing towards the town, chased by Jackalman warriors. This scene is just eye-candy, they cannot die and killing the Jackalmen doesn't do anything. After reloading the game, both villagers just stand near the entrance.

Proceed towards the north-west, where you'll find another Rebirth Fountain. From here, move to the west. In one of the alleys you'll find a Jackalman Beserker hero holding the Family Sword of Anherru (a quest item). Return this sword to Anherru (the town guard back at the entrance of Rhakotis) to complete the side quest The Family Heirloom. There are (at least) three possible locations, where the hero might spawn and there's also a bug, where he doesn't spawn at all (in that case, reload).

In one of the northern alleys, there's also a cave entrance leading to a small cave called Lookout Cave. Within the cave you might encounter Crypt Worms, Giant Beetles and/or Tomb Rots as well as find some minor treasures. There's also an exit leading to a small plateau above the Hathor Basin (one of the next regions), but you can't do anything up there nor progress any further, so head back to the slums.

The Rhakotis Library's entrance is located to the west. 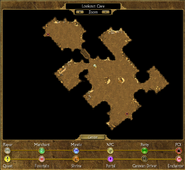 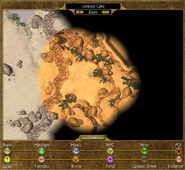 Inside the Lookout Cave