The Rhakotis Library is where Imhotep wanted you to retrieve the Scroll of Invocation, the first part of the main quest in Egypt (Act II). The library can be reached by exiting the Rhakotis Slums to the west.

Enter the library, there's a Rebirth Fountain at the entrance. Shortly after you'll meet Neb-ka-n-ra, the head librarian, who is chased by monsters (he cannot die, though). Talk to him to get some additional information about where the scroll can be found.

Down the stairs you'll find the Library Archives, consisting of a number of connected rooms. You need to progress clockwise to get to the stairs leading further down to the vault. In the first rooms you will encounter lots of Jackalman. As you progress, you will also encounter small groups of undead (Shades, Desecrated Dead) popping out from the ground.

The stairs down lead to the Library Vault, the fairly small second level. In the first two rooms you might encounter Giant Beetles and/or Crypt Worms. Especially the latter ones can be dangerous in numbers, so be careful. Behind the huge door you'll find the first boss, Scarabeus the Desert King (see his article for some strategies on how to defeat him).

After defeating Scarabeus, the large doors will open and you may proceed to the north-eastern room to retrieve the Scroll of Invocation from the statue. Taking the scroll will open an exit in the north-eastern wall, leading to the Hathor Basin, where you need to go in order to get to the Temple of Ptah (Imhotep wanted to meet you there). 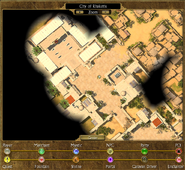 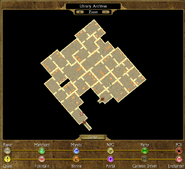 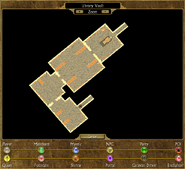 In the Library Archives

In the Library Vault