Hence to its name, majority of this region occupied by ruins, which presumably was left by Mycenaean Civilisation. 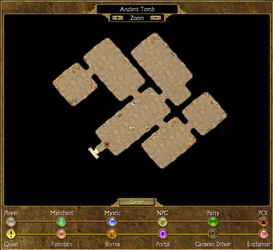 Many undead warriors and foul beasts will be waiting you in this collapsed halls and underground rooms. Be careful and move slowly or enemies can easily overwhelm you purely by their numbers, when even more of them can pop-up from a ground.

Inside the Ancient Tomb: