The Memphis Outskirts is a small urban area you'll come through after leaving the Lower Nile region and before entering the City of Memphis to the north-west.

There is a tomb near the southern entrance of this region, holding some treasures and undead monsters. Follow the road between the crop fields to get to the city.

Before actually entering Memphis, you might want to complete the side quest Lowest of the Low, given by Merab at the entrance to the Beggars Quarter (the entrance is to the right of the main city gate). 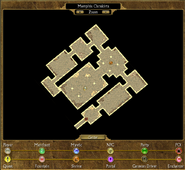 In the Mysterious Tomb: