Megara Bluff, to the South-East

City of Megara, to the South-West

Long and sandy shoreline, which lies to the east of the City of Megara and named after it. 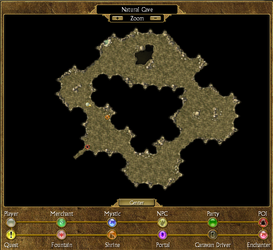 A cave filled with various enemies and treasures. Also often you can find a Shrine near the entrance.

Megara Coast littered with many broken parts of drowned ships. Be careful near them or souls of the dead sailors will appear and attack you.

Inside the Natural Cave: