Typhon, the boss in this region, is also the final boss of the original Titan Quest. Act IV was added in the Immortal Throne expansion. 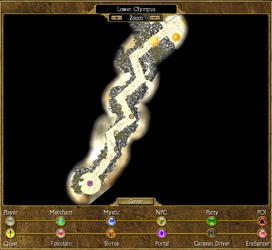 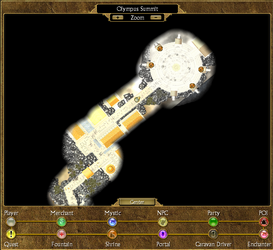 At the beginning of your ascent of Olympus you'll come across plenty of Gilded Skeleton mages assisted by Elder Limos.

This group is particularly dangerous because the mages will Spellshock you, switching off buffs, which is hard to notice in the heat of battle. As if this weren't bad enough the Elder Limos will descend on you, they are fast, leech your life and slow you down. Frankly quite deadly.

If you are ever caught in this mess, try a (Divine) Scroll of Ice Nova to freeze the lot, then quickly kill the Mages, then the Limosi. Otherwise, try to draw them to you in small groups rather than fight as big group just before the right turn on the platform. Above all, it is advised not to go in with low life leech/vitality resistance.

In the original Titan Quest in patch 1.15 and below were statues active which grant Typhon temporary abilities when he hits them.