Laconia Woods, To the South-West

Spartan Road, To the North-West

Laconia Hills is a region in early Greece (Act I), leading from Laconia Woods in the south-west to Spartan Road in the north-west. 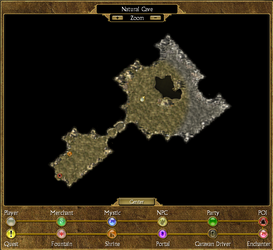 There are two Satyr encampments in this region. Both located on a hills, which stands on both sides of the main road. Western one is a twice bigger, than eastern.

To the west from passage to the Laconia Woods and also near Natural Cave you can find many bleached human and animal bones. Most likely this is remains of Harpies victims. Said Harpies lurkes nearby.

The cave is inhabited by small demons called Eurynomus and by Cave Bats. There is also sometimes a shrine at the cave entrance. Also here you will find Pandarus, Eurynomus quest boss.

In the eastern area, just near the road, you will meet a man named Theages, standing next to his broken cart. He will give you the fourth side quest, The Lost Dowry.

Near the bridge to the north-east you will also meet a wayfarer named Parmenides, who will give you some information on the Spartan War-camp ahead.

Laconia (and the rest of Greece for that matter) are very mountainous. The term "Balkan" is actually Turkish for "Mountain". And Laconia is no exception. With the main mountain range being the Taygetus range. Unlike in the game however, the hills today are where most of the remaining Laconian woods are and as such one in the same, compared to the rather treeless area in game.[Greec