Jackalman is a type of monster found in many regions in Egypt (Act II). They are beastmen and bear some similarity to Satyrs or Ratmen in Greece (Act I). In general, Jackalmen are easy prey. Their magic users have some sort of 'chain-healing' spell they occasionally cast, thereby healing all nearby warriors.

Larger groups of Jackalmen can be encountered in or near the following locations: Rhakotis Slums, Rhakotis Library, Village of Sais, The Lower Nile, Sobek Plateau, Canyon of Isis. 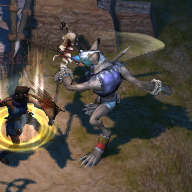