Gigantes are powerful enemies found in Hades' Palace, acting as the dark god's personal guard. They seem to be giant suits of armor inhabited by souls of fallen warriors. They are primarily melee fighters, but they do possess some abilities to deal damage to targets outside of melee range.

Gigantes are slow, but resilient. Despite their powerful appearance, the common Armorites and Vanguards are not as dangerous as, for example, groups of Machae archers, especially those that include Master and Grandmaster Archers. They deal a lot less damage with their basic attacks, but they take longer to kill.

Gigantes used to be categorized as Magical monsters, as such items with the Ritual prefix could help reduce the damage they deal, howewer that is no longer the case, as the Anniversary Edition has had them properly re-classifed as Giants.

Vanguards and Armorites: The most common types, clad in golden armor. They cannot attack distant targets, but can charge towards them. Vanguards wield spears, Armorites carry one-handed weapons and shields and can use those shields to attack as well.

Vindicators: Champions with dark blue armor. They dual wield and can deal some damage at range with fire waves. 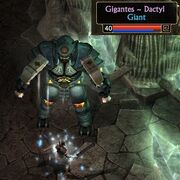 Dactyls: Rarely encountered "super-Vindicators" with a purple name just like quest monsters, an indicator of their power. They are easily the most dangerous enemies in the entire game and can kill unprepared players in just a few seconds. Visually identical to Vindicators, except for the glowing white aura that surrounds them. In combat, they dual wield and can use two special attacks, a quake and a shockwave. Both of those attacks deal extremely high amounts of physical and lightning damage. As a reference, an adequately equipped Conqueror progressing through Hades' Palace on Normal difficulty will suffer about 2000 damage from each special attack, potentially jumping up to almost 3000 on Epic. To reduce the risk of death, max lightning resistance and get as much physical resistance as you can. Increasing armor will help as well. You can try to obtain some equipment that reduces damage taken from Giants, but such items are few and far between, most notably the strength-based Donar's Might set, which grants 30% reduction. Dactyls die relatively quickly to physical damage, but they have a high chance to avoid projectiles (30/50/70%, depending on the difficulty) and are resistant to elemental, pierce and poison damage.

Dactyls' special attacks: the quake and the shockwave. 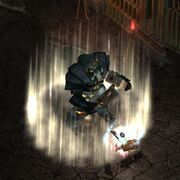 Porphyrion's Set - each piece always rolls with +defensive ability and cold, pierce, fire and lightning resistance on the helmet, the chestpiece, the bracers and the leg armor respectively. Can drop from Vanguards and Armorites.

Alcyoneus's Set - each piece always rolls with +defensive ability and pierce, fire and lightning resistance on the chestpiece, the bracers and the leg armor respectively. The helmet instead grants an absorption shield when taking damage. The +defensive ability bonus is higher than on Porphyrion's equipment. Can drop from Vindicators, Dactyls and heroes.

Rancor - a hammer intended for characters focusing on vitality damage. Can drop from all Gigantes except Vanguards.

Vengeance - a shield that can deal fire damage to attacking enemies and grants the Quick Recovery skill. Can drop from Ephialtes and common Armorites.