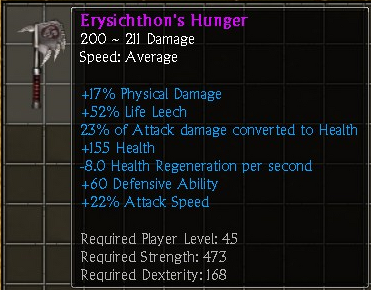 Erysichthon of Thessaly used an axe to cut down an oak tree sacred to the goddess Demeter and killed the dryad nymph within the sacred oak. The dryad nymph cursed Erysichthon before dying. As punishment, Demeter had Limos, the spirit of insatiable hunger, live within Erysichthon. As a result, whatever he ate only caused him to become more hungry. Erysichthon sold all his possessions in order to buy food. In desperation, Erysichthon even sold his own daughter, Mestra, into slavery to get money to buy food. Eventually Erysichthon ate himself to death in an act of self-cannibalism.