Dragonian is a dragon-like monster, but they lack wings and have hands to wield weapons. Their different colours can help identify their types. They are first encountered at the end of the Great Wall area when approaching the village of Zhidan and are then found throughout the later Orient (Act III). They are some of the most challenging monsters in the game.

Dragonians pose a serious threat when they overwhelm the player. They deal heavy damage and have a lot of health.

There are 4 basic groups and two types in each. First there are the axe-wielders. Those are brown-colored Headhunters and larger, pale orange Ravagers. Headhunters are perhaps the most common type and usually pose little threat. Ravagers sometimes appear in a pack of Headhunters, usually no more than one per pack.

The next group are the Lancers. They are larger than Headhunters and look similar to Ravagers, except they wield a spear. Deathlances are tougher and are found only in the caves under Wusao Mountain. An attack they almost always use when encountering a player is Take Down, a darting spear stab attack from the Hunting Mastery. Deathlances are grey and cyan in color.

Next are the archers. Dragonian archers are not simple archers, for they use enchantments. Firetalons are more common and are of bright orange color. They shoot flaming arrows that deal significant fire and Pierce damage. At close range they can also breathe fire. Frost Scourges are the cold versions of Firetalons and instead enchant their arrows with cold. They are only found in Wusao cave, usually among groups of Deathlancers, and are of blue color.

Finally are the mages. Both types of mages have the same colouration - dark blue. In fact, both types are very similar - they both can cast an energy shield on themselves which reflects a portion of player's damage back at him/her, both have less survivability than other dragonian types, and both are always found alone or in pairs within packs of other dragonians. However, Warlocks are only found inside of the Wusao Caverns. Wyrm-Mages also have a more dangerous lightning ball attack than Warlocks, since they shoot 4-5 of those at a time. Those balls deal a lot of damage and also stun at the same time, making the player vulnerable to other dragonians, such as Firetalons.

In order to weaken packs of dragonians one must defeat the mage first and only then the other Dragonians.

Piercing resistance is pretty much a necessity, as most dragonians use a spear or a Bow.

Just like the ordinary units, dragonian heroes are tough and pose a great threat. Sargoth Manbane, Tarthon Na'Arak, and Vort the Red are all spellcasters. 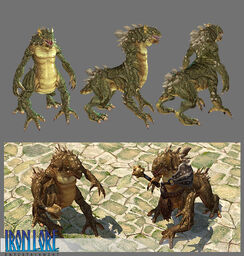 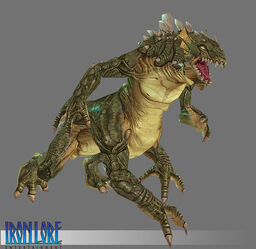