Dark Obelisk is a stationary Device found in various tombs in Egypt (Act II) and some caves in the Orient (Act III). It looks like small pillar with a glowing blue-green skull on its top and is capable of summoning several entities of Hideous Phasma, fast-moving blue-green glowing skeletons (Undead).

A Dark Obelisk will summon a total of four entities of Hideous Phasma - first three are melee fighters and then one is slightly more powerful ranged caster. If a Phasma is defeated, it is immediately replaced by the Obelisk. If the Obelisk is destroyed, all Phasma it created will vanish along with it.

Usually it's the best strategy to ignore the Phasma and directly attack and destroy the Obelisk, thereby also destroying the Phasma. They won't do that much damage anyway (except for the ranged-attacking Phasma, but it's just one).

the four shrines (part of The Invocation main quest): 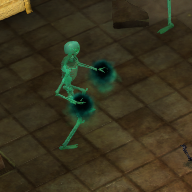