Memphis is a city in Egypt (Act II). Here you meet with Imhotep after retrieving the Scroll of Invocation and will progress with the main quest, ultimately leading you back to Memphis again and from there to Thebes. There are also three side quests given in the Memphis area.

You enter Memphis from the south-east, from the Memphis Outskirts.

Near the city entrance (before actually entering the city) you will find the entrance to the Beggars Quarter, where you meet Merab, who starts the side quest Lowest of the Low.

The south-eastern area of the city (generically named City of Memphis) is partly infested with Dune Raiders, and there's also a Rebirth Fountain. The western part is the Memphis Plaza, where all the people lurk around. 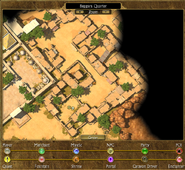 In the Beggars Quarters