Village of Tegea, to the South

Megara Bluff, to the North-North-West 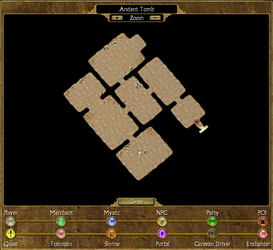 Entrance to Village of Tegea

Immideately after you enter this region from Village of Tegea you will encounter moderate group of Regular Zombie, whos attack village defenders. Help this poor people to fight back restless corpses.

If you go to the east you will find small ruins of some temple, filled with various undead. Behind this ruins lies path along lake shore, which leads to the entrance of the Ancient tomb.

Old tomb with many undead warriors, which guards treasure filled chests and sarcophaguses.

Big group of various Satyrs and even some Centaurs, who blocking the path to the Megara Bluff.

Harpy nesting grounds, which lies in the south-west corner of Arcadia. Here you will find many Harpies and Carrion Birds. Also from here you can see canyon which lies below and populated by high level enemies. You will go there in Act V.

Inside the Ancient Tomb: