Anouran (from Greek άν — no and ούρά — tail, i.e. an amphibian with no tail) is a race of frog-men of various sizes encountered through all the Fourth Act. Initially they're mostly green and reside on Rhodes, met on the Asomata coastline and later in the swamps surrounding the Tsakonian Ruins. A variation called Albino Anourans are met in Hades infesting the Stygian Marsh. Generally speaking, they're not very powerful (though they can be dangerous in numbers) and have the curious habit of randomly panicking and running away when attacked.

Anourans will occasionally drop certain pieces of armor, for both warrior classes and spell-casters. Sometimes they can drop rare weapons, including the Thorn Bow, the Schlilsh's Skinner (sword) and the Mbuti's Advocate (spear). 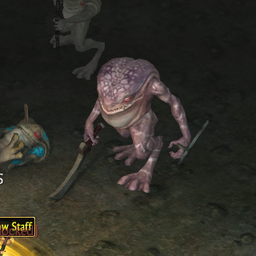